Before I get to the next studio album in the Billy Idol series, I thought I would throw in a bonus Generation X Bootleg album out of Italy.  This 2LP Set is called the BBC Transcription Disc Series No. 126 – 1978.  It is live show from December 8th, 1978 out of Sheffield, England.  It is an unofficial release so therefore, a bootleg.  And it is fantastic.

I was in New York at this great little record store in Greenwich Village and came across this disc.  I was talking with the clerk asking about any Generation X on vinyl and he told me I needed this one and man he was right.

Generation X was criticized on their studio albums for trying to be more commercial than Punk.  Well, the live album shows they were a real Punk band.  I find this live show to really show off what this band was all about.  You can hear the attitude in the guitar playing and the drumming.  And of course, Billy’s snarling and attitude is pure punk with a big FU to everyone. 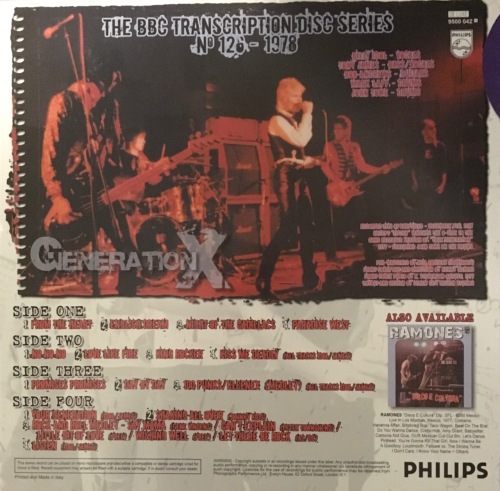 I have to say I think I like the live stuff better than the studio albums.  It has more heart and although it is rough around the edges, that is also the charm to it all.  Songs that I thought were just okay on the records, stand out here.  I really enjoyed “English Dream”, “Night of the Cadillacs” and “Paradise West” more here than the albums.

They played a bunch of their popular songs like “King Rocker”, “Kiss Me Deadly”, “Day by Day” and “100 Punks” all with more energy and more style.  A real big standout was the Rock medley at the end of Side Four.  It contained the songs “Say Mama” (Gene Vincent), “Can’t Explain” (The Who), “Little Bit of Love” (Free), “Wishing Well” (Free) and “Let There Be Rock” (AC/DC) and shows they can kick some ass live.

I also love the colored vinyl.  One disc is brown and the other is a translucent orange.  There are versions with Red & Blue as well as a Green & Black one.  I won’t be trying to get each, but there are few out there worth checking out.

If you get a chance to grab a copy it is worth picking up to get a part of punk history as Generation X were slap dab in the middle of the huge British Punk scene in the late 70’s.  I would give this a 4.0 out 5.0 Stars for its attitude and the fact I enjoyed it more than their studio albums. It gave me a whole new appreciation for the band.  Plus, it is great to hear Billy Idol perform before he was really famous and to see how far he has grown as a singer and performer. Really great stuff.