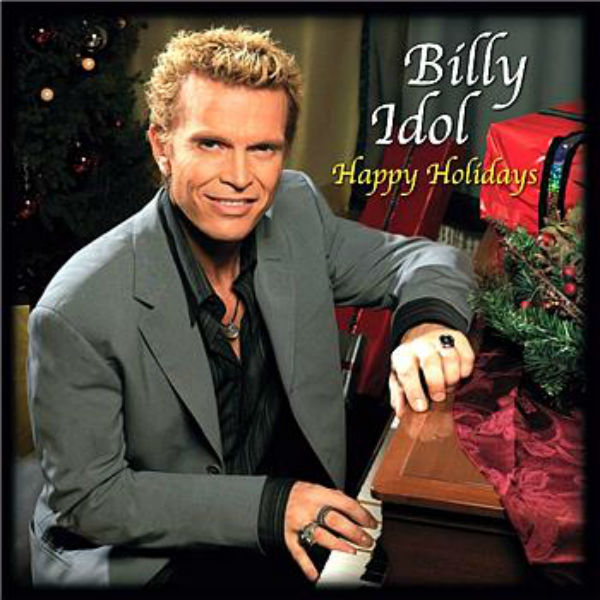 A short time after Billy’s comeback release, ‘Devil’s Playground’, he thought (or somebody thought), we should release a Christmas Album.  I don’t know if it was because of the positive feedback for the Christmas song on the last album “Yellin’ at the Xmas Tree” or drugs, but they decided to do it.

Now, “Yellin’ at the Xmas Tree” is absolutely fantastic. It is a rocking Idol song and I love the twist on the song that it is not all happy and joyful at Christmas. Some people don’t have the stereotypical Yuletide joy.

This album is nothing like that.  It is Billy putting on his dinner jacket, pouring himself a drink and playing traditional Christmas songs in both a traditional or even a smoke-filled room jazz style.

The album is full of songs you know and love (well, the original versions you love) and it even has two brand new songs written by Billy…oh joy!!  I know…you can feel my excitement.  I am sorry…I will be completely honest with you.  I HATE CHRISTMAS ALBUMS!!!  That isn’t entirely true.  If you want to do a compilation Christmas albums with different artists singing the best versions of Christmas songs…I am all for it.  If it s one Singer or one Band doing a whole entire 40 minute album of them doing Christmas Songs..,please count me out!!!

The only interesting thing about this album is that there are two covers to choose from (I think from either different countries or years…not sure which it is sorry).  Outside of that, I can’t think of anything else that is interesting.

The songs…well, he does sing them.  He jazzes them up, he does a little Rocka”billy” on one and the rest is very Bing Crosby style of even Elvis.  But all not interesting to me in the least little bit.  You know the songs so there is no use going through them.  You don’t know the two new songs, so let’s discuss those.

The first is “Happy Holidays” and the second is “Christmas Love”.  And that is really all I have to say about them.  My mother always told me, If I can’t say something nice, don’t say anything at all.  Okay, I know, I never listened to my mother anyway.  Do the songs SUCK???  YES!!!  The album was painful to get through!  It also didn’t help that it was May and not around Christmas time.

The songs throw every cliche in the book out as lyrics and they are sappy, crappy songs.  The best thing about “Happy Holidays” is that it is only 2 minutes.  The only good thing about “Christmas Love” is that it does eventually end.

I am not sure what Billy was thinking, but this should have never been released and probably never recorded.  Hell, it is so bad that even Steve Stevens wasn’t involved with recording it.  That should tell you something right there!!

Now, being my birthday is Christmas, you would think I love Christmas music.  You would be wrong.  Unless the Christmas song is “Happy Birthday”, I don’t really want to hear it.

John Grisham wrote a novel called “Skipping Christmas” and after this, I might just do that.  If you have to skip a Billy album, let this one be it.  I will score it a 1.0 Star out of 5.0 Stars as I will give him credit for at least trying.  I think he was trying!

Up next will be Billy Idol’s ‘The Very Best of Billy Idol: Idolize Yourself’.