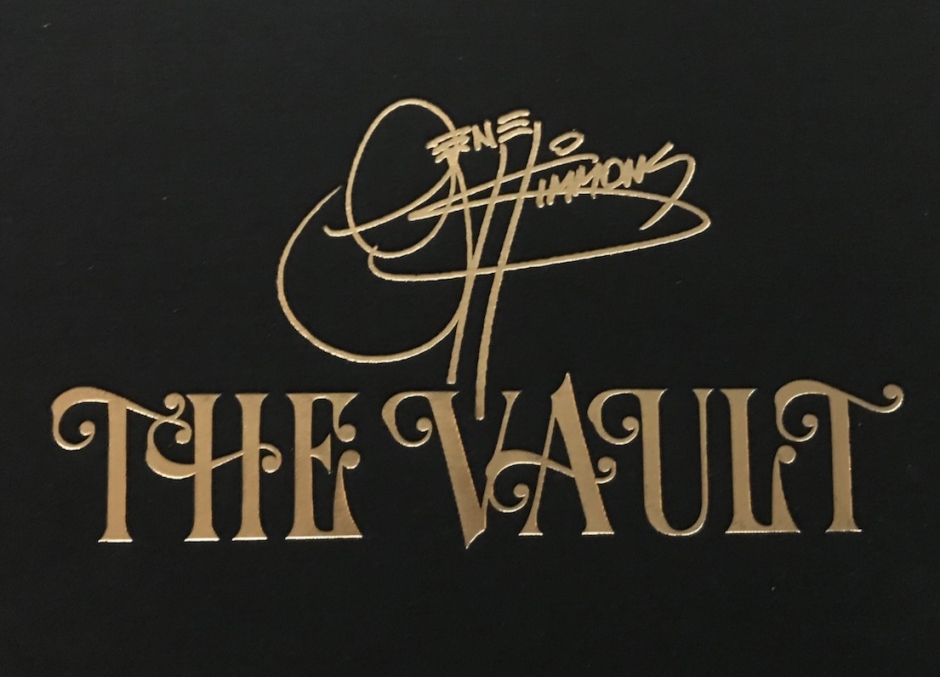 Welcome back to the Gene Simmons The Vault review.  We are now on Disk 3.  Below are the rules I am trying to follow with each review.

The songs aren’t in chronological order.  Gene states they are more of a mood or vibe.  Disk 3 is mostly demos from songs that ended up on Kiss albums in some shape or form.  It also contains the long awaited demos that feature Eddie and Alex Van Halen.  This was the disk I was most pumped to hear.

The picture for Disk 3 is Gene in makeup with that famous tongue…it is quite fetching!! 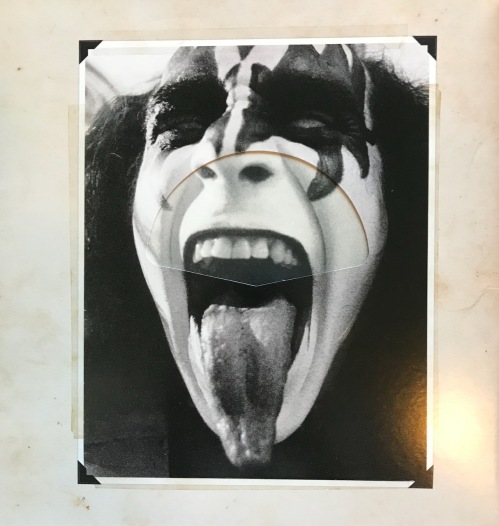 And on the flip side is the track licking…I mean listing…that damn tongue gets me every time (ha!)… 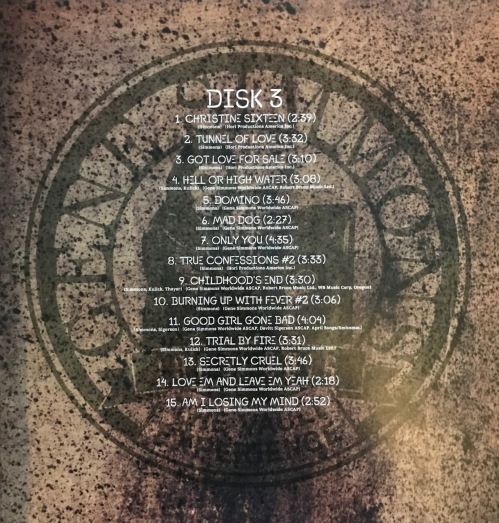 First up are the three songs with the Van Halen brothers.  This is what we have been waiting to hear for years once it was known there were some track laying around with Eddie and Alex on them.  “Christine Sixteen” is a demo from around April 1977 and written by only Gene.  The song pretty much sounds like the final version except we don’t get the spoken lines from Gene in this.  The solo is the actual solo from the final product as Gene liked it so much, he made Ace copy it note for note.  It it is a great song and demo, but nothing to say that the Van Halen boys are on it.  (GRADE 3)

The next VH/Gene song is the demo for the song that ended up on Gene’s solo album.  The song was recorded in April 1977 as well and written solely by Gene. Now this is ore like it.  You hear Eddie Van Halen throughout this song.  Even though the arrangement of the song is basically the same as the final product, the guitar work here is amazing.  The lyrics are also a little different than the final product as well.  But listen and you can hear Eddie throwing little riffs all over the place and that solo…yeah!!  (GRADE 4)

“GOT LOVE FOR SALE”

The final of the three Van Halen & Gene songs is “Got Love For Sale”, the song was also known as “Have Love, Will Travel” in its earliest existence.  This is my favorite of the three.  Gene’s bass is ripping throughout and very prominent while Alex’s drums are on point, but it is Eddie again that tears it up with a heck of a solo.  (GRADE 5)

This is song was written by Gene and Bruce Kulick and recorded back in 1986.  The song ended up on Crazy Nights and the demo that is heard here has both Gene and Bruce on the recording.  This is less polished and is probably better than the album version for that reason.  Gene’s vocals are better sounding without all the effect added in the final production.  And Eddie who…Bruce rips a great little solo here!!  (GRADE 5)

“Domino” was written by Gene and this demo includes the band Silent Rage plus an added drum machine.  Apparently this version was on the Kiss Box Set, but the biggest difference being this version is slowed down a half step and the outro is slightly different.  Whatever was done doesn’t matter as this still sounds great.  One of my favorite tracks off the ‘Revenge’ album and a great one here as well. (GRADE 5)

This is another demo that was on the Kiss Box Set as well.  This was recorded in 1975 and written by Gene.  On the recording is Gene on all instruments but JR Smalling on drums.  The song was for preparation of ‘Destroyer’ album, but didn’t make it.  The biggest difference between this version and the Box Set version is really small.  The only thing is probably this is a much better mastering as it is so much cleaner. (GRADE 4)

This song was written by Gene and the final product ended up on ‘The Elder’.  The song is one of many iterations of another song on The Vault called “Eskimo Sun”.  ‘The Elder’ version has more echo on the guitars and Gene’s vocals are a lot softer and more calming.  Way more production than what you get here, which is a great thing.  I find this version to be way more raw and way more palatable.  If ‘The Elder’ sounded more like this, it might have been a better album. (GRADE 4)

This is another Gene only song and was recorded back in 1978 and as you know, ended up on Gene’s solo album.  This particular version is the closest to the final product.  Also, this version has Katey Sagal on backing vocals.  You know Katey as the mom from ‘Married With Children’.  Also on backing vocals are Franny Eisenberg and Carolyn Ray.  Now, this is a good, clean version of a demo, but I don’t like this song. (GRADE 2) 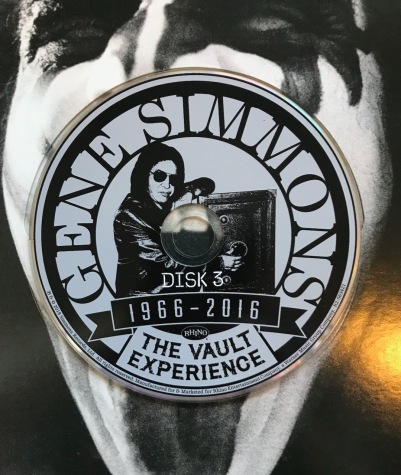 The writing credits on this song are great…Gene Simmons / Bruce Kulick / Tommy Thayer before Tommy was in the band.  The song was recorded in 1993 and let me tell you this version is nothing like the final product that ended up on ‘Carnival of Souls’.  It doesn’t mention anywhere who was on the demo, but we will assume maybe at least Bruce or Tommy on guitar…but could be Gene.  This version is grittier than the final song. Rough around the edges, but easier to listen to than that flaming turd on ‘Carnival’.  (GRADE 3)

This a Gene only song and timing of recording is unclear as it could be 1975/1976 or even later.  Gene claims he is the only one on this particular version.  The final version wound up on his solo album.  There is nothing outstanding about this version, but it isn’t too bad at the same time.  But as far as this disk goes, it falls short. (GRADE 2)

The song was written by Gene and Mercury Records president  Davitt Sigerson.  The album version shows that Peter Diggins has a writing credit…weird.  This was recorded 1986 and has Bruce on guitar.  It is a pretty solid demo of one of my favorite tracks from Crazy Nights. I don’t hear too much difference from the final version..nothing huge anyway.  I enjoyed blasting this one for Bruce’s solo. (GRADE 5)

The title might be “Trial by Fire” and the music might be from that song, but the lyrics are for a song called “Live Fast, Die Young”.  It was written by Gene and Bruce and recorded back in 1985.  The chorus is the big difference from the final ‘Asylum’ version.  This version is definitely not as good as the final product, both musically and lyrically, but it is so cool to hear the original lyrics and for how the song started.  The recording is a little rough and hollow at times, but this is the crap I love to explore. (GRADE 4)

This song was written by Gene pretty early in the 80’s and the final version ended up on ‘Asylum’. This version could be recorded in 1983, but nothing certain. Gene plays all the instruments and the recording is really rough, listenable, but rough. Regardless of that, I don’t care for this song no matter what it would sound like.  The final version is much better even though I don’t care for it all that much.  (GRADE 1)

The song was written by Gene and the demo was recorded back in 1976.  The final version ended up on ‘Rock And Roll Over’ which is completely different.  This version doesn’t even have the “love ’em and leave ’em” chorus. The verses are mostly the same (at least the first verse).  Now if you listen to the music you can hear other songs like the guitar work became “Sweet Pain” and the chorus was used in “Burn Bitch Burn”…pretty cool.  The guitar solo on this is great, sounds like Ace, but not credited. (GRADE 3)

“AM I LOSING MY MIND”

Written by Gene this is yet another version of “Eskimo Sun” and “Only You”. It was recorded in 1980 and is filled with dance beats and did Gene try to write his own disco song…god help me!!  Gene even tries to go high with the singing.  It is pretty bad, but kind of cool too.  (GRADE 2)

And that is Disk 3.  You get 15 tracks yet again and these were mostly demos of final Kiss songs which is a little unfair to the other discs as some of those are truly unreleased material.   The average score for this disk is a 3.5 out of 5.0.  This got a higher score than the others so far as it had an unfair advantage, the Van Halen brothers.  Still though, the only real stinker for me was “Secretly Cruel”  and a couple that were at least tolerable.  For the Kiss fan, this is a fun disc.  I will let you know that I think anything 3 or better is great and couldn’t be more thrilled with this disk as well.  I know I will eventually run in to some stinkers as it is a matter of time.

Here are all the posts we will do on the set: