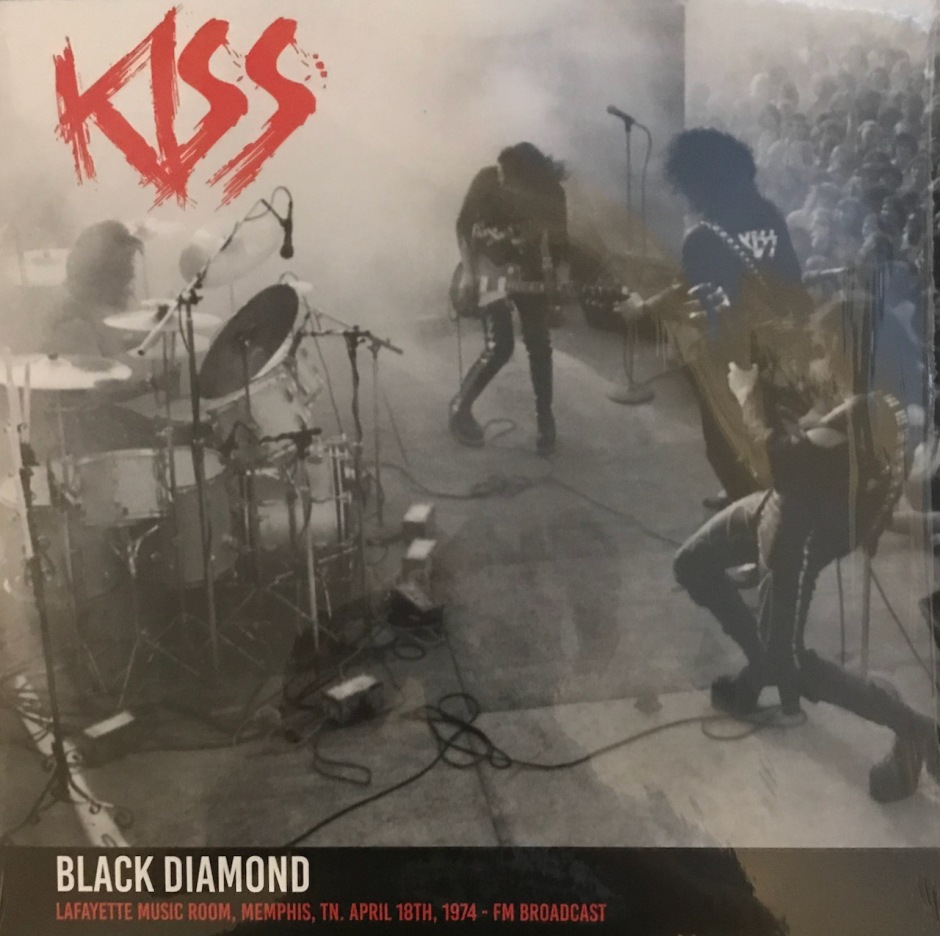 In my quest to get as many Kiss Bootleg’s I can, I found this one in a local record store, new and sealed. And cheap. This is actually an easy one to get if you are collecting Kiss Bootlegs. I think I paid $25 for it. There is nothing really special about this one, no inserts, no picture sleeves and no surprised in the package like I have received in a lot of my bootlegs. This one is rather generic. For historical reasons though, it is pretty cool. The recording is an FM Broadcast from April 18, 1974 in Memphis, TN at the Lafayette Music Room and is one of the earliest recordings of the band.

If you look at the setlist, you will notice a few things stand out. One is they basically played the entire debut album with a few minor exceptions. Two, they play the song “She” which won’t come out until 2 albums later on ‘Dressed to Kill’. And Three, they play a song called “Acrobat” which is actually the basis for the song “Love Theme From Kiss” from the first album. This is two months after the debut album release, so it is strange they played the “Acrobat” version and not the album version.

The album and set opens with “Deuce” and boy can you hear the tape drag on this one, pretty drastic. But you can still make out the song and hear Gene just fine as it is in the instruments where you have the issues. Nothing is real clear except the vocals. Towards the end of the song, it clears up and gets a little louder and that cowbell comes in nicely. “Strutter” is up next after a slight pause and you get more wobbly instruments and even a little on the vocals this time around. Paul sounds like he is singing the song so much slower. Again, you are buying this strictly for the historical value…that is what I keep telling myself anyway.

“Firehouse” sounds great and I happy with that version. It is an untouched, live version warts and all and it is quite enjoyable. Ace’s solo sounds good and you get a glimpse of the band doing what they do best with no real hiccups. The cool song on here is “She” as I said it hadn’t even been released yet on an album. The guitar opening on it sounds a little slower and I am guessing that is the tape drag as there is a lot of wobble. But vocally again, sounds good. Gene is menacing as ever and Paul on background duties. The coolest part is the instrumental break/guitar solo as it isn’t what we get later. This the reason to buy this release if you need one. And last up for Side 1 is the badass song “Nothin’ to Lose”. And by this time you are used to the wobble and so it starts sounding pretty decent (okay, decent enough). I love this song as you get both Gene and Peter on vocals (and Paul is heard pretty good on backing vocals). I love Peter’s gritty and raspy old school singing on this one. Always fun.

Side 2 kicks off with the Ace Frehley penned song “Cold Gin” (after the radio DJ does a station break), but with Gene on vocals as Ace wasn’t singing this early on in the band. Now, I did get to see Ace do this one this past Summer when he opened for Alice Cooper but that is another story. I really love this song but I will say this version seemed a little flat and not sure if that was the band or the recording itself. After a little tuning, we get Gene’s bass and some thumps until they become “100,000 Years”. Paul sounds fresh and youthful and can do some great ooh-yeahs back then.

Another favorite of mine to hear live is “Black Diamond” even with a DJ interrupting the opening notes for a station break. The tape is wobbly again as it sounds a little funky and messed up, but it is still “Black Diamond”. I love the slow opening and then the bombastic explosion for the rest of the song. Plus, the instrumental break and solo are always great. An all around fantastic song every time I hear it. The song ends the broadcast. Then the show announcer comes back and the band is tuning their instruments a little they go in to what is labeled as “Acrobat” but it cuts out the “Love Theme From Kiss” parts off and is just the band jamming. Peter has a little drum solo piece then the band kicks in and they jam out, all instrumentally and then they start singing only a little. There are very few lyrics and they sing “You’re much too young” a couple times and then they go back to jamming and we get a killer guitar solo piece as well. Then Paul says “Good Night” and it is all over. Fun track.

Despite the tape drag and the wobbly sound in out at times throughout, I still find this an enjoyable most especially for an early version of “She” and for the encore with “Acrobat”. It is also a cool historical piece to have anything live and uncut from 1974 with them really just getting going. All-in-all, it turned out to be an okay show as you get used to the sound issues and you enjoy it for what it is. I can’t give it too high of a score, but I will give it at least a 2.5 out of 5.0 Stars (but it should get more for the two songs I mentioned – maybe a 3.0 to 3.5…but that might be too generous).

Join me tonight at 7pm as I guest on The LeBrain Train with @mikeladano
The next review in the Jeff Scott Soto Series is up now. This time it is Kuni’s ‘Lookin’ For Action’. Click on the link in the bio to see if this is one of his best
The Aerosmith review for ‘Permanent Vacation’ is up now on 2loud2oldmusic.com. Go check it out and the other reviews in the Aerosmith Collection Series.
Go check out the Def Leppard 1988 U.S Tour Book. It is up now at 2loud2oldmusic.com. I saw the show 3 times. How many did you see on this tour?
The 14th review in the Cheap Trick Collection Series is up now at 2loud2oldmusic.com. This time we discuss ‘Lap of Luxury’. Check it out.
32 years ago today this beauty came out. Slaughter’s ‘Stick It To Ya’. Happy Anniversary.