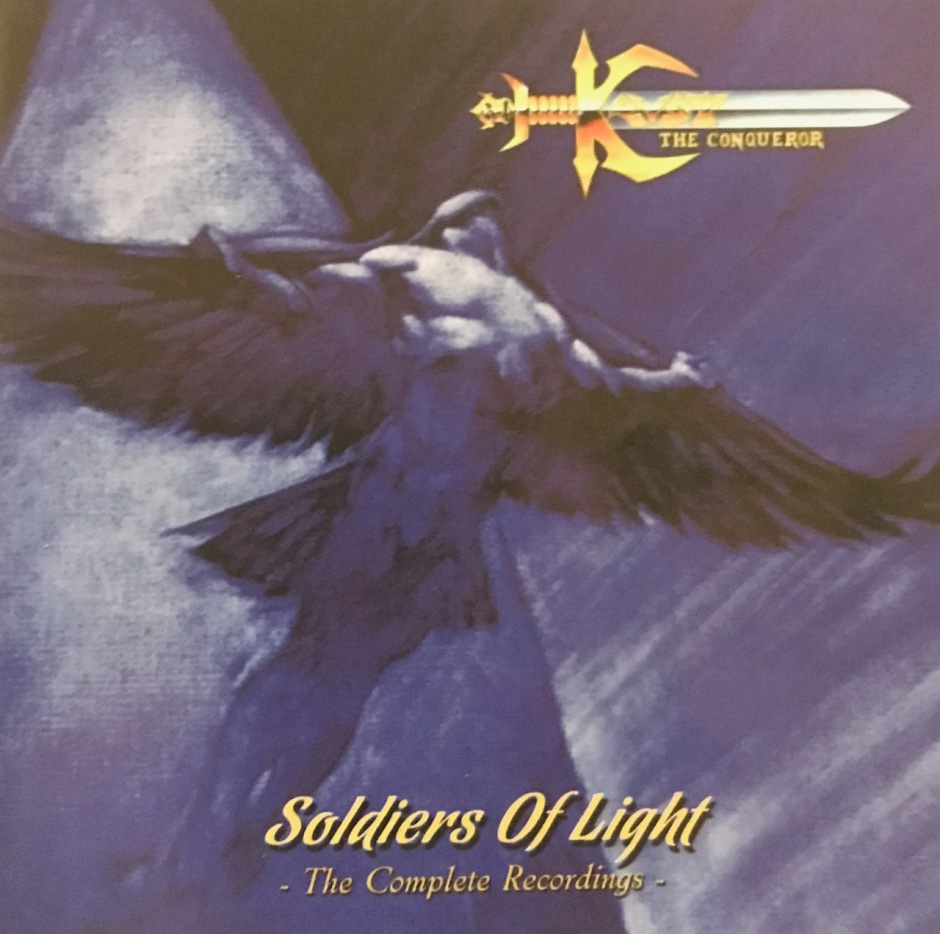 You are probably wondering why I am reviewing two albums at once. I know, it is strange. Well, here is the thing. We are reviewing Kryst the Conqueror’s E.P. – ‘Deliver Us From Evil’, however, I don’t have that version of the album. I have the more recent release which is called ‘Soldiers of Light: The Complete Recordings’. This contains the E.P. ‘Deliver Us From Evil’ as well as all the songs from that recording session.

But first, let’s back up a little. Kryst the Conqueror (pronounced Christ) is a project from former members of the band The Misfits. It consists of Jerry Only (known as Mo the Great in The Misfits and as Mocavious Kryst for this band) and his brother Doyle Wolfgang Von Frankenstein. The idea of the band was take fantasy and sci-fi imagery and mix it with religious themes and in this case Jesus was now a Conqueror and was going to deliver us from evil. Yikes!

The band never officially had a lead singer. Jeff Scott Soto was brought in to record the songs to get a feel for the songs and how they would sound, but he was never intended to be the lead singer. In fact, on the E.P. he is not even credited. The lead singer is listed as Kryst the Conqueror. In fact, with all the songs he recorded, only 5 were ever released and that was the original 5 Song E.P. ‘Deliver Us From Evil’. From what I can gather, it was released as a fan club package to the Misfits Fan Club to make sure Jerry was keeping in touch with the fans. But the project never really had any staying power or amounted to anything much. I guess that isn’t totally true, although they never performed live, the band did stay together (at least Jerry & Doyle) until around 1995 when they reached an agreement with Glenn Danzig to reignite the Misfits and then they started touring under that name taking some of these songs and turning them in to Misfit songs.

END_OF_DOCUMENT_TOKEN_TO_BE_REPLACED

Can you believe there is only one more month in the year? It has flown by so fast. And here we are again with another month end wrap-up of the purchases we have made here at 2 Loud 2 Old Music. It was a pretty decent month and another month where CDs outweighed the vinyl. There should’ve been a couple more vinyl in here, but with all the delays in vinyl pressing I have 3 that have been bought that will now not show up until 2022!! Thanks Adele!!!

First up this month are a couple that came in at the end of October after I had done my post. First is the John 5 & The Creatures release ‘Sinner’ and this one is signed. It is an awesome album and it will be interesting to see where this lands on our year-end countdown.

The other item that I received was another stellar box set from Whitesnake. This time around it is the 25th Anniversary of the album ‘Restless Heart’. It is full of demos, remixes and the always cool Evolutions disc that walks you through the evolution of the songs. Sadly, there was no live show added but that is being picky.