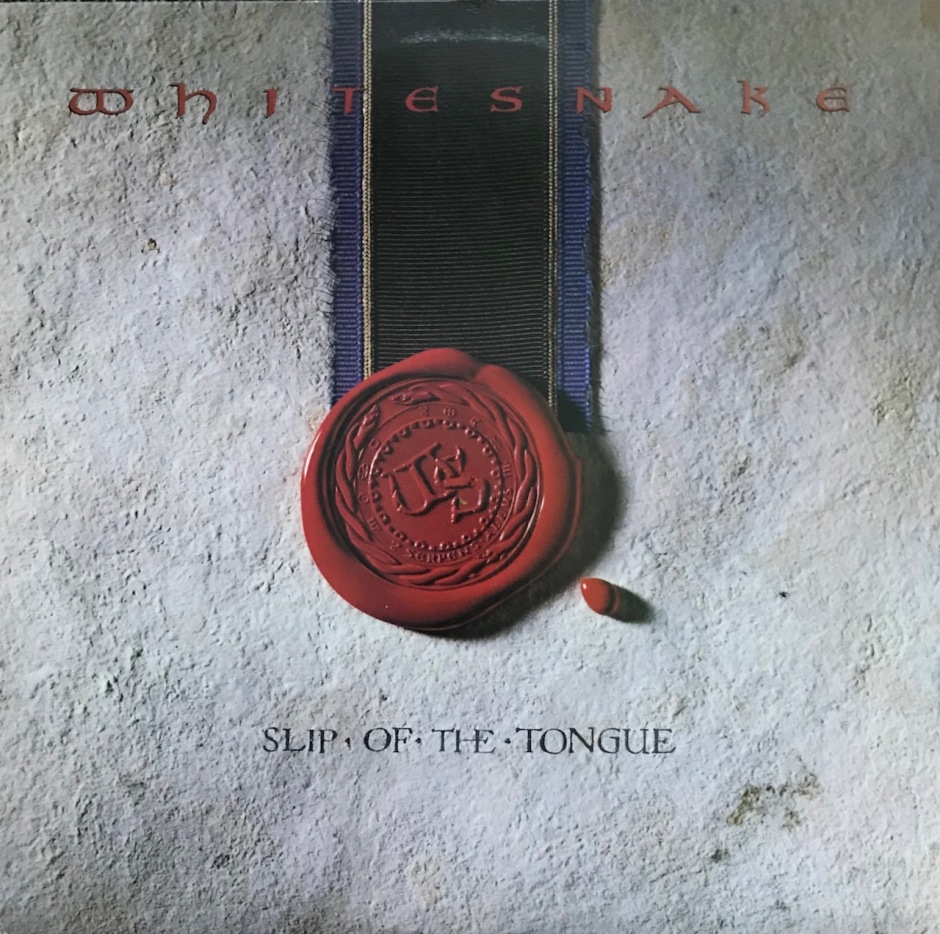 After coming off the tour of the band’s biggest selling album, ‘Whitesnake’, it was time to record a new album.  But before that could happen, another guitarist left the fold.  Vivian Campbell left the band and it was reported as “Creative Differences”…whatever that means.  But it what it did mean, was more line-up issues for the band.

But that didn’t stop David from starting to write new songs.  He and his now creative partner, Adrian Vandenberg, set forth with writing the new album.  They actually wrote some of the album while on tour, but the bulk was crafter in David’s home in Lake Tahoe. I would think that wouldn’t be a bad place to hold up to write. The songs were all written by David and Adrian (except for one), but sadly, Adrian wouldn’t play on any of them. 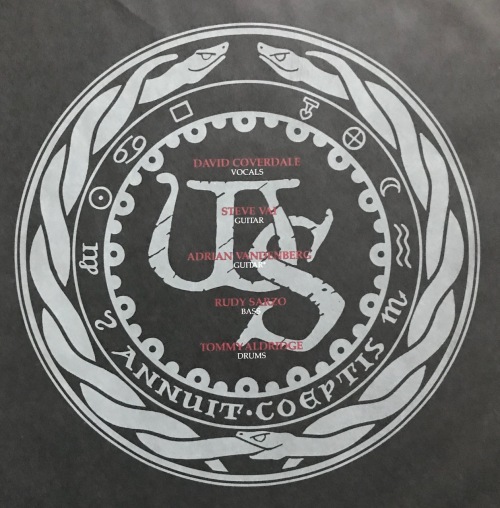 Adrian hurt his wrist and could not record.  He would need surgery for the issue and that put him out of commission for some time.  So, David needed to find a replacement to help with the album.  Now the replacement was to record, but it was also to replace Vivian.  He needed someone really strong and thankfully for us, he found one of the greatest guitar players ever to hold a 6 string.  It was the former Frank Zappa and former David Lee Roth guitarist Steve Vai. Steve brought a whole new style and sound to Whitesnake. Don’t expect Vai to play the blues, he had a texture and sound that was not what Whitesnake fans were used to, but we could accept it. 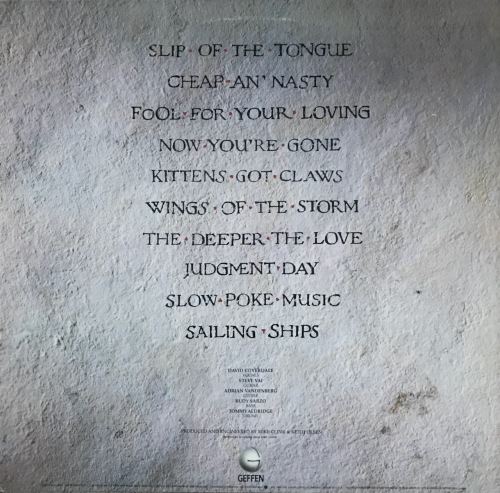 The rest of the band was still in tack.  Rudy Sarzo was still on bass and Tommy Aldridge on drums.  On keyboards, they don’t have an official member, but they did use Don Airey for some of the album and various others as well.  In the recording of the album, they had a lot of guest on the backing vocals.  They had David’s old Deep Purple bandmate, Glenn Hughes, and they had Mr. Mister singer, Richard Page, as well as singer Tommy Funderbirk from the band Airplay.  Then the album was completed.

The album would come out November 7th, 1989 and would go to #10 on the Billboard charts and go on to sell millions of copies.  The album would spawn 4 singles and win the band even more fans. Despite some mixed reviews with the new sound, there was no denying this was another strong Whitesnake album, but when the tour ended…so did Whitesnake.  David was done and put the band on hiatus.  The last couple albums had caused David a lot of pain and struggles and he needed a break.  But how long of a break would it be and what would happen before the next Whitesnake album.  Well, we will explore that, but first let us get to the music. 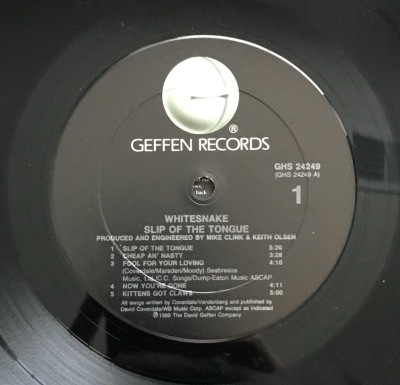 The album opens with the title track, “Slip of the Tongue”.  It opens with what sounds like wind and then the keyboards kick and then then Bam!  The music cranks up and blasts you upside the head.  You notice the sound is more polished and the guitar sound is different. David is sounding great, but he is singing at higher pitch then he normally does.  All singers were doing this back then, just listen to Paul Stanley from Kiss.  The classic blues style sound was gone and replaced with the shredding sensation that is Vai.  His guitar was his brush and he added so many layers and textures the band never had before.

Next up was “Cheap An’ Nasty” and gives you the typical Whitesnake womanizing song, but honestly, we love that about them.  It is old school rock & roll full of bombastic drums from Tommy and some sweet guitar work from Vai.  David feels at home in this element and sleazes it up to the best of his ability.

Then we get a modern version of the Whitesnake classic song “Fool For Your Loving” which was on the 1980 album ‘Ready an’ Willing’.  The original was more bluesy and had a smooth groove…this one is pure late 80’s hair band metal.  Full of slick productions and a little more uptempo and fits with the time.  This single was huge for the band, going to #2 in the U.S. and the video was on constant airplay on MTV.

The last single released was the power ballad “Now You’re Gone”.  The song received minimal airplay on MTV as the music scene was starting the change.  The power ballad still had its place, but was fading.  The song keeps to the normal slow at first, then rock it out, then back to slow and so forth and so on.  It is still one of the better ballads they have done and I enjoy it as much now as I did back then.

The final track on Side One is a Steve Vai classic called “Kittens Got Claws”.  The opening sounds of what seems like cats in heat is all from Vai’s guitar.  Then David howls his way in and we are back to that classic sleazy Whitesnake song that only David can do as his vocal swagger oozes the cockiness needed for this type of song.  Vai delivers one of his best solos on the album which is why this song wound up on one of his own greatest hits albums.

Side Two kicks off with the speed shredding of Vai and doesn’t seem to want to stop.  Coverdale sounds great, a little deeper on the vocals and “Wings of the Storm” was the perfect song to kick things off.  Tommy’s kick drum really kills at the end accompanying the fret work of Vai as they play the song out.  Great rock track.

Then we get the second ballad called “The Deeper the Love” which was an old song David had lying around that Adrian took and added the right musical touches.  Dave would finish it up in Tahiti…rough life.  It follows the typical pattern for a ballad and it was good if not a little too cheesy at times.  I like the other ballad better as this is soaked too much in keyboards, but the video has Tawny Kitaen which is always a plus.

The next track was the song David wanted as the first single, but record company said no and to say he was pissed was an understatement.  It is called “Judgment Day” and it is one of two epic sounding songs on the album.  David was always compared to Robert Plant saying he was trying to imitate him and none more evident than this song.  There is a Zeppelinesque guitar style that screams Page and then David’s screams scream Plant.  I don’t particularly care about any comparisons, I love this song for the song.  It sounds so massive and stylistically different than everything else on the album that I like the change of pace.

Then we get another sleazy track from Whitesnake called “Slow Poke Music”…oooh, I wonder what he means.  This is the only song I really don’t like as it is too cheesy…I mean really, the title alone is enough to make you vomit.  Plus, the song just lacks any of the heart or passion the other two sleazy tracks have.  This was pure filler for me.

The album ends on a slow note, but not a bad note.  It is another ballad; however, this is not the Whitesnake typical ballad.  It is the other epic sounding song I was mentioning earlier.  “Sailing Ships”.  It sounds a little like Led Zeppelin as the songs seems mystical and isn’t the typical Whitesnake theme.  It is one of the most serious songs they have ever done and the guitar work on it is mesmerizing. The sounds Vai can make with his guitar are nothing short of amazing.  The song stays soft for most of the song then explodes towards the end to go out with a bang.  It is one of my all time favorite Whitesnake songs and that is saying a lot.

The track score is sensational at 9 out of 10 Tracks as Keepers or 90%.  Although Whitesnake has gotten further away from their Blues rock sound, the songs on here are strong thanks to the great relationship between David and Adrian.  Vai’s guitar playing added so many layers and textures that it sounded like a new band.  It was the perfect album from beginning to end, but it stands up there with the best of them.  My overall score will be a 4.5 out of 5.0 Stars which I think a few of these albums have gotten.  It will be interesting to see where I put them in the final ranking at the end of this series. This album is for any Whitesnake fan and especially if you are a Steve Vai fan.  Some killer playing.

Up next… David Coverdale  – “The Last Note of Freedom” – Single Review.