2021 was not quite as strange as 2020 as things started to get back to normal. I got out to see a couple concerts and back to digging in the record stores and even went in to the office a few times.  Covid pushed back a lot of albums in 2020 and they finally came out in 2021. Some were worth the wait and well, some weren’t.  But there were some great releases and I am sure I missed a number of great albums and if you look around the web, there will be tons of Top Album lists you can get a pretty good idea of what you should check out in case you missed any of these.

This year I am doing things a little different.  I am only doing one list post, but that list will be centered around my Favorite Rock Albums of the year.  At the end I’ll give you my Top 5 Non-Rock Albums of the year as I didn’t listen to a ton of new releases this year as I was focused so much on my Kiss, Judas Priest, Queen and now Cheap Trick & Aerosmith Series.  That took a lot of time.

Also note, these are MY FAVORITES!!  These are not the most popular or trendy albums.  You won’t find the cool trendy bands, because they are usually here today gone tomorrow.  These are the albums that I connected with during the year and I kept coming back to again and again.  And without further adieu, here are the Top Rock Albums of 2020:

Eclipse is a melodic rock / glam rock /hard rock band out of Sweden and let me tell you Sweden knows how to pump out these bands. I think there are more rock bands in Sweden then there are people.  It is just a guess.  The two original guys, Erik Martensson and Magnus Henriksson. are back with their 9th album and they keep delivering.  Erik’s vocals are killer and Magnus can lay down some riffs.  The three opening tracks, “Roses On Your Grave”, “Dying Breed” and “Saturday Night (Hallelujah)” just suck you in and you know you are in good hands and just along for the ride at this point. END_OF_DOCUMENT_TOKEN_TO_BE_REPLACED 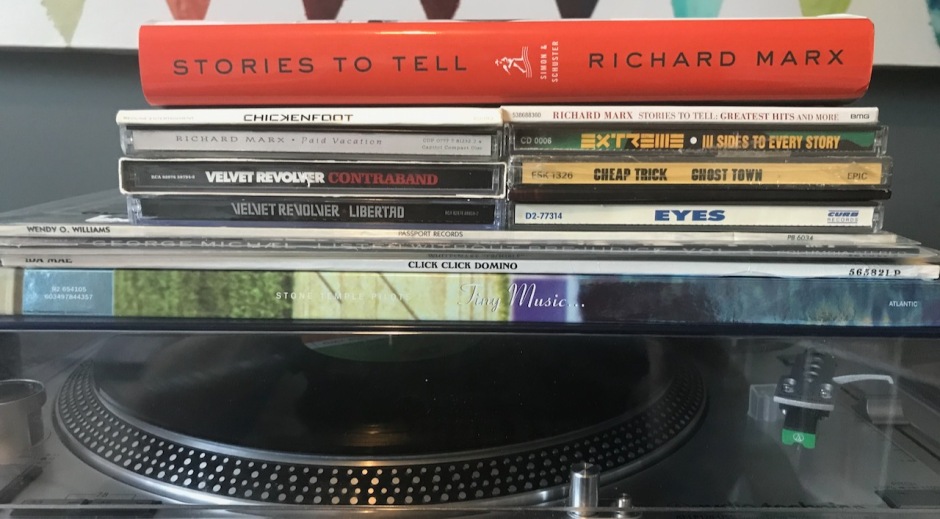 We are about to the end of July so time for another wrap-up of my purchases for the month. We had a little quieter month and some things I am so happy to have in my collection. The vinyl was limited this month, CDs ruled the month and I even have a nice new book to read. I would say it was a really great month of finds.

We will start off with some simple finds from when my kids and I hit up Manifest Discs and a little shop called 2nd & Charles. At Manifests, I found a couple of Velvet Revolver CDs that were in my collection at one time, but we won’t go in to that right now, I am just happy to have them again. The one on the left, ‘Contraband’, is the one my brother-in-law was the engineer on so yes, he worked with Slash and Scott Weiland!! Pretty cool.

Then we went down the street to 2nd & Charles and my daughter picked up 7 Volume set of Buffy the Vampire Slayer graphic novels and I grabbed a couple CDs. These were two more that were in my collection years ago and now they are back as well. A nice Richard Marx one and Chickenfoot. And Richard Marx will come up again soon…

END_OF_DOCUMENT_TOKEN_TO_BE_REPLACED 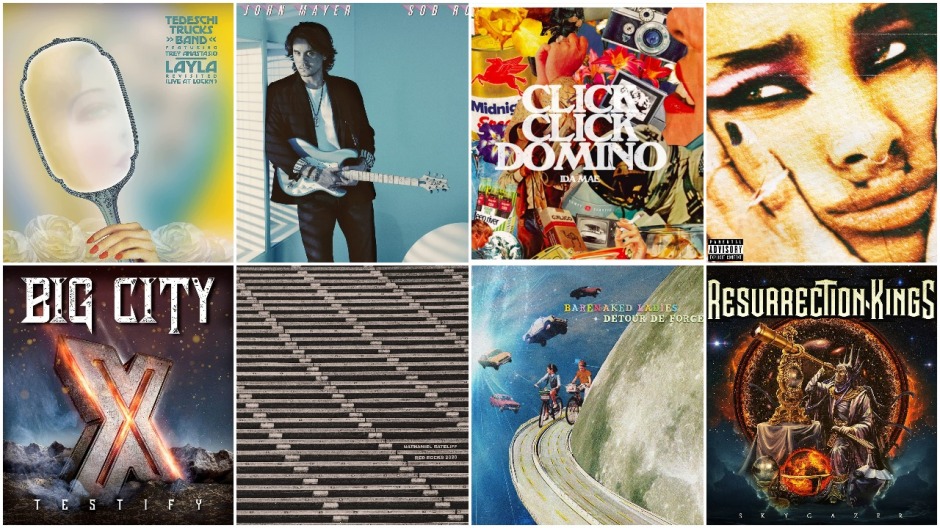 Things are heating up as we are now in the middle of Summer and if you think it is hot outside, just look at the heat on this list of new releases. There are 44 albums set and ready to go so there is something for you I am sure. We have metal, rock, pop, folk, country, world, r&b, alternative, indie and probably genres I’ve never heard of until now. There are 2 I am interested in hearing, but not so much buying just yet. They are marked in Blue as usual. Let me know what you want to hear or what I may have missed as I am sure there is still something out there I don’t know about. Thanks for stopping by and I hope you all stay cool and have a wonderful weekend.

END_OF_DOCUMENT_TOKEN_TO_BE_REPLACED

The year is almost over so it is time to look back at what was awesome in music during the year.  I have already looked back at the Top Rock Albums of 2019 (click to read).   This list will cover all other genres that I listened to over the year including Pop, Country, Christian and whatever other genre you want classify these albums.  Rock is my favorite genre and that is why it gets it’s own list, but that doesn’t take away from any of these choices as I think they are great on their own.

I feel I didn’t get to as many as I would have liked as the year seem to get away from me.  I did spend a lot of time on a few series such as finishing The Billy Idol Series, The Kiss Bootleg Series, the Kiss Box Set 6 Part Series and starting the David Coverdale Series.  These consumed a lot of my time.  What I am trying to say is I missed a lot.

Note:  These albums were my favorites and not necessarily the most played on the radio (which I hate the radio) or even the biggest sellers.  There aren’t the trendy indie bands on everyone else’s top albums list (okay, there might be one or two).  These are just what I came across during the year and connected with me in some way and some thanks to my kids.  So, we might as well get started…

A Country Super-Group consisting of Brandi Carlile, Natalie Hemby, Maren Morris and Amanda Shires.  I have not been digging Country lately, but the women on country rock.  I found this to be enjoyable and was really digging the songs “The Highwomen”, a rework of the the Jimmy Webb classic “The Highwayman” as well as “Redesigning Women” and “Crowded Table”.  Check them out.

END_OF_DOCUMENT_TOKEN_TO_BE_REPLACED

Welcome to June and the first Friday of releases.  There are a lot of releases this week so there should be a little something for everyone.  For me, there is a lot as well!  A lot of nothing.  There are a couple I find appealing and they will be highlighted in Blue.  One of which I have had for a month and be enjoying it a lot.  Hopefully there is something you like.  Let me know what interests you and if I missed anything.  Thanks and have a great weekend!

END_OF_DOCUMENT_TOKEN_TO_BE_REPLACED 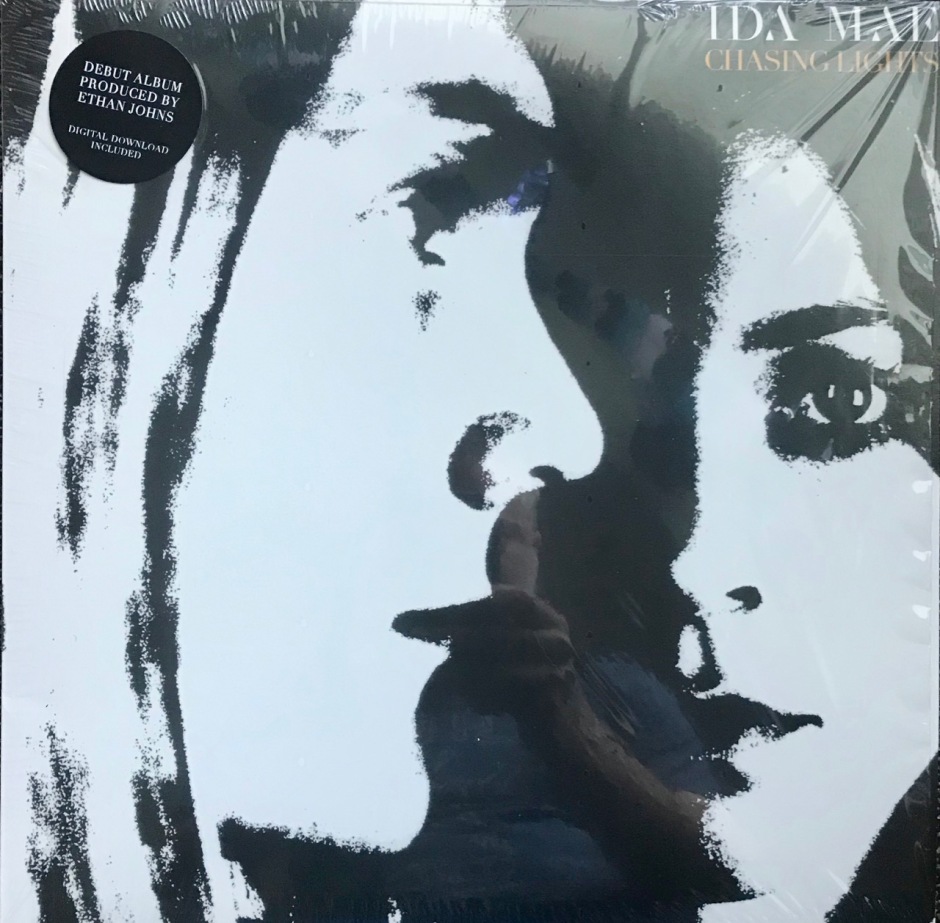 Ida Mae came into my life thanks to going to see Greta Van Fleet in concert.  Ida Mae was the opening act and what an opening act they were!  Before the show, I was over by the Merch table and saw that they were selling the vinyl.  Without hearing the band, I took a chance and bought the vinyl.  It turns out that was a very wise decision.

The album, called ‘Chasing Lights’, hadn’t even been officially released yet.  I picked it up on May 15th and the album was set to be released tomorrow, June 7th.  This was one of the very few times I have ever been able to review an album prior to its release.  I had plenty of time to sit, absorb it and make a well-informed decision on the quality of this release.

Before I do that, let me tell you a little about Ida Mae.  The duo are a husband and wife team named Chris Turpin and Stephanie Jean.  They hail from England, but currently reside in Nashville, TN (who doesn’t live there now if you are a musician).  Now, you might recognize their name if you know the band Kill It Kid who were a British Blues band that dissolved after three albums.

END_OF_DOCUMENT_TOKEN_TO_BE_REPLACED 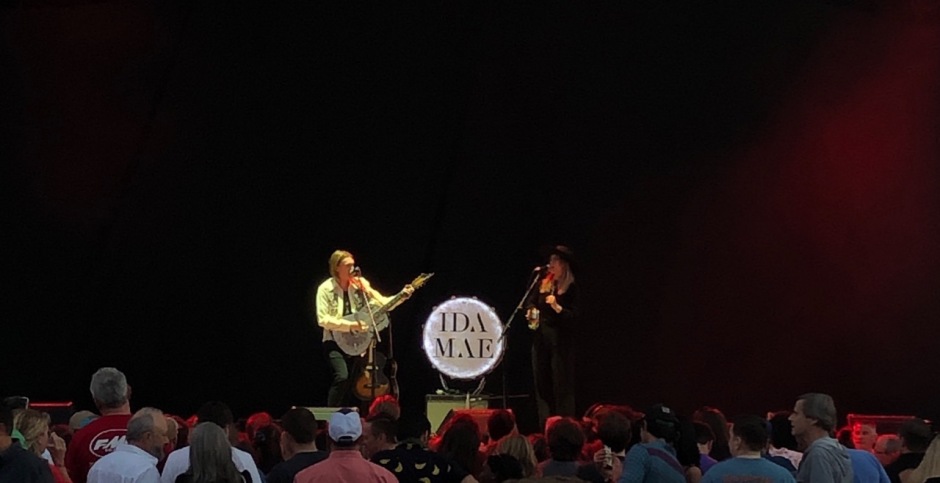 The opening act for Greta Van Fleet was a duo named Ida Mae.  It is a husband and wife duo out of England who now reside in Nashville, Tennessee.  At least they have for the last 10 months as they just moved to the States to seriously pursue this thing called music.  The husband is Chris Turpin on guitar and vocals and his lovely wife Stephanie Jean also on vocals.

And they are all you got as the opening act.  It was just Chris and Stephanie on stage for their 6 song set.  And let me tell you that was all you need as they were beyond impressive.  They did some covers and played some of their original songs for an album that will not be released until June 7th.

They were selling that album though at the Merch table and, of course, I picked it up on vinyl (review will come later as I need time to dive into it fully).  I wanted to get them to sign it, but since they didn’t come out until after the show, I was unable to hang around and wait.  My kids had to go to school the next morning and it was already 10:45 and we still had to drive 45 minutes home.

Anyway, about the music.  The setlist was as follows: