This month’s The Original Vs. The Cover is tackling another Kink’s song.  I must be a glutton for punishment because the last time I did a Kink’s song, I was blasted by the Kink’s fans for not picking the Kink’s song.  Their fans are rabid, no doubt!!  Will I make the same mistake again…we will see shortly!

This month’s song is the Kink’s deep cut classic called “Stop Your Sobbing”.  The song is off the band’s 1964 debut album simple called “Kinks”. There are two stories about the song and it’s origin, but both similar.  The first is that Ray Davies’ girlfriend was so upset that they were becoming famous that she broke down in tears as she was worried she would lose him.  The second is that  Ray broke up with his girlfriend and she was so upset, she started crying and it pissed him off.  Either way, she lost him!!  I am sure those rabid Kinks fans will let me know the right story.

The Pretenders covered the song for their own debut album, ‘The Pretenders’, and had some decent success with it hitting the Top 40 in the UK, but only the Top 100 in the US.  The coolest thing to come out of the song was that singer, Chrissie Hynde got to meet Ray Davies as a result of them singing the song.  A budding relationship started between the two which actually led to a child.  I would say they both got a lot out of it.

Now, let’s get to the songs… END_OF_DOCUMENT_TOKEN_TO_BE_REPLACED 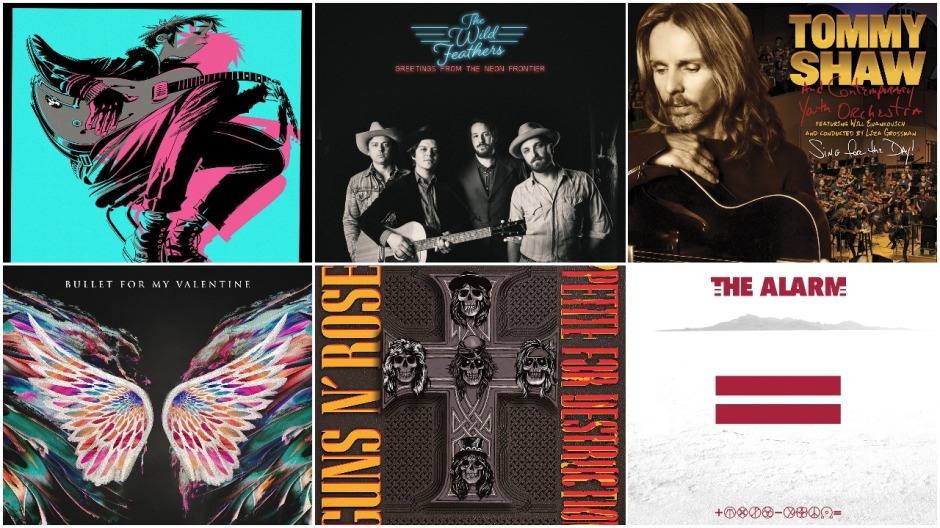 We are at the end of another month and what a way to end it.  There are so many releases this week I hope there is something you can find and enjoy.  My vacation will be ending this week and then back to work next, so I am going to try and do nothing for a couple days except listen to music.  My choices are in Blue.  Let me know what you are feeling and if I missed anything.  Have a great weekend!!

END_OF_DOCUMENT_TOKEN_TO_BE_REPLACED

For this month’s edition of ‘The Original vs The Cover’, we are going to cover the song “You Really Got Me” by The Kinks vs the cover by Van Halen.  When Van Halen originally released this song back in 1978, I thought it was an original…what did I know, I was only 9.  The Kinks didn’t exist in my world yet.  Apparently, I wasn’t the only one as Ray Davies has mentioned that fans have come up to them after shows and thought it was cool that they played a Van Halen song.

“You Really Got Me” was released on Sept 2, 1964 in the US and the song was off the band’s album ‘Kinks’.  The song went to #7 on the Billboard Hot 100, but it went all the way to #1 in their home country of the UK.  It was their third single at the time, but it was the first to really do anything for the band.  It was so successful, it became their signature song.

The song has been described by Ray Davies as a “love song for street kids”.  It is a rebellious track of sex and lust and all around gritty, dirty love.  It is that energy both versions capture so well.

The Kinks’ version had a very Beatlesque quality to it which makes sense since the Beatles were huge at the time.  The band wanted to capture that sound and they truly did.  The song to me also had a real punk feel to it.  It was aggressive and in your face, but it was the guitar sound that really made the song.

END_OF_DOCUMENT_TOKEN_TO_BE_REPLACED

My Sunday Song #83 is “Whistle for the Choir” by The Fratellis.  The song is off their debut album ‘Costello Music’ which peaked at #2 on the UK charts and gave us a few hits including “Chelsea Dagger”.  However, I really liked this song the best.  “Whistle for the Choir” was their third single off the albums and it reached #9 giving them their 2nd Top 10 hit in the UK.  I don’t see where they did very well in the States which is a shame.

The Fratellis are a Scottish trio with a very retro feel and garage rock sound.  This song for me is more of the retro feel as it is a slow ballad using only an acoustic, bass and drum (well it’s a trio – what else are they going to use).  The song has a Beatlesque quality to it and even a little Ray Davies vibe.  I think for those reasons, the song struck a chord with me.  The simple sound and hypnotic beat pulled me in and put me in a trance where I swayed back and forth while listening.  It was encapsulating.  There is a little guitar solo, but also a nice whistle solo as well.

The song tells the story of a guy, who after a night out on the town, meets a girl that is way out of his league.  This doesn’t stop him.  He is going to try and get her anyway.  The nice thing is it doesn’t tell you if he gets the girl or not.

END_OF_DOCUMENT_TOKEN_TO_BE_REPLACED

Rock fans rejoice!!  There are an abundance of rock records out today.  There are a variety of other genres as well including a Barry Manilow release, but ROCK is KING today for me.  My favorites to listen to are highlighted in Blue. There will be more on the list I am interested in, but will get listened to whenever I have time.  I hope there is something here for you!  Happy Friday and Happy Listening!!